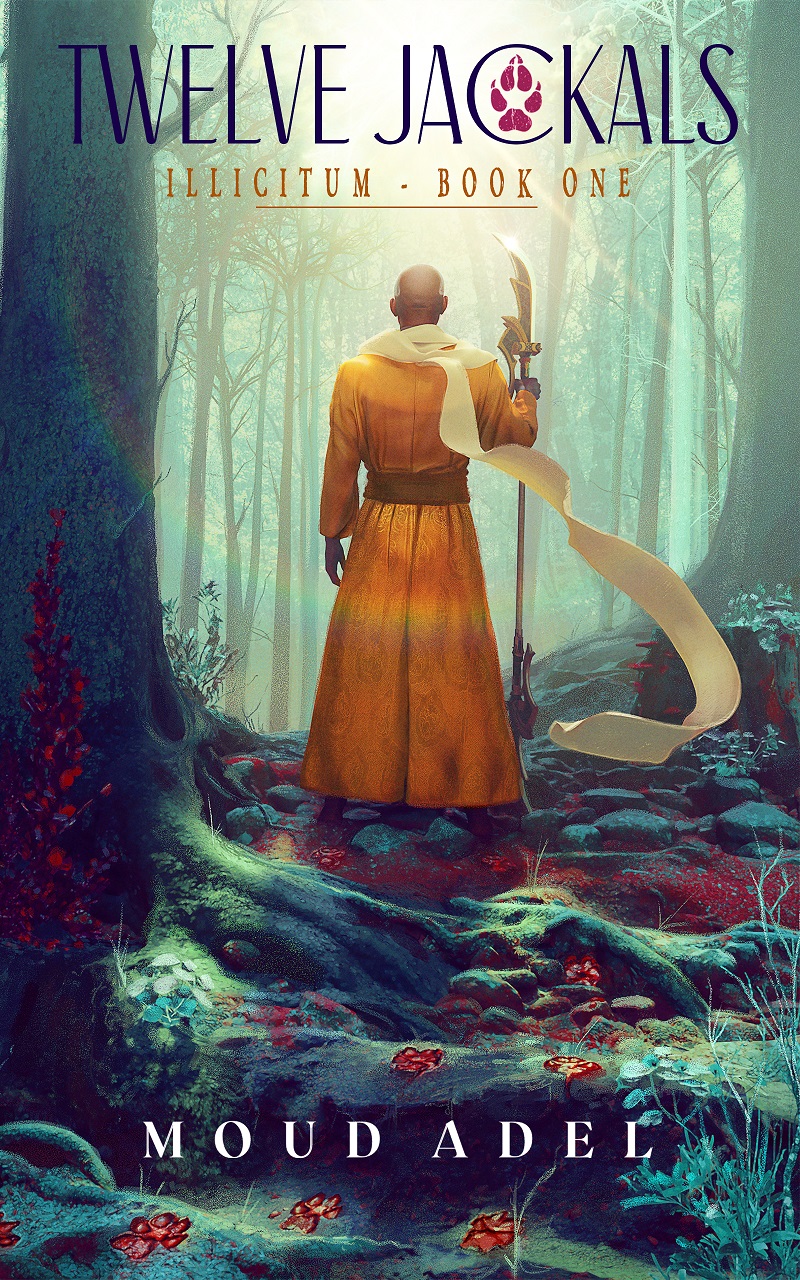 Rakamai and his sister walked through the streets of Kala, wind blowing Retan’s curly hair behind her hips and sliding over her brother’s bald head while causing their wide garments to flap. Below their feet, grains of sand danced through their toes and the narrow holes their movements created between their feet, and the flip-flops they wore to protect their soles against an untamed ground. Rakamai glanced at every Kalangou he saw, studying the merchants as they set their goods on simple wooden tables, the children in white thobes on their way to school, and the guards patrolling the streets with spears in their hands. Whenever his eyes met any of his citizens’, Rakamai gave a little nod that he quickly received in return.

The sun slowly ascended with no clouds to block its light, enlarging the shadow of the red temple centering the village little by little, bringing shade all the way to the western wall surrounding Kala’s main village. Once the brother and sister reached the entrance of the temple, the two guards manning it lifted their spears and moved to the side, bowing as their two leaders stepped inside.

Rakamai and his sister made their way through the narrow corridors centering a clear lake of Kala’s holy water. On each side, six statues almost as high as the temple walls stood in the middle of the lake, each representing a once upon a time great warrior of the faction. They passed through the temple’s second gate into a large court, the size of their bodies appearing insignificant in comparison to the red-stoned walls. After walking through a series of narrow passages, they reached a room with the faction’s symbol painted on the ground, five uncomplete squares, each inside the other, and all cradling two circles with a triangle at their center and a round eye at the heart of the design.

Two men were already inside the room when Rakamai and Retan arrived. Their thobes were identical in shape and color to Retan’s, their heads bald like Rakamai’s, and their skin dark, though not as much as the siblings’.

“Rani,” Retan said with a smile, greeting the man to her right. At five-feet-one-inch, he stood half a foot shorter than her and a full foot below the other two men. “I didn’t know you would be back today.” She tapped both his shoulders twice.

Rani returned her smile. “I have some news to report.”

“Then we have time for greetings.” Rakamai walked up to Rani and tapped his shoulders the same way Retan did. “It’s good to see you again, my friend. How do you feel?”

“Missing the quietness and clear sky of our desert, but otherwise alright.”

“As usual,” Retan said with a chuckle, “you still take every chance to get out of your duty.”

“I appreciate your sacrifice,” Rakamai said, “but you are our best spy.”

“Plus, you are the shortest among our people,” the other man added, his grin a little wide.

“What is that supposed to mean?” Rani asked, his voice slightly raised.

“It means no one can be a better spy than you. This tiny body of yours helps you to fit everywhere and hide easier than the rest of us.”

Rani turned to Retan and Rakamai. “I would like it to be acknowledged that Rasd just admitted I’m better than him at something.”

“I didn’t hear anything,” Retan quickly replied, her hand atop her mouth, covering her laugh.

Rani exhaled loudly and returned to Rasd, “It doesn’t matter. You know what you just said.”

“I don’t know what you are talking about,” Rasd quickly added, tilting his head and looking at the stone ceiling as if inspecting its lack of details.

“Alright, alright, let’s get back to business then.” Rakamai pivoted toward Rasd. “Any movement at the borders?”

Rasd shook his head. “Night patrols had nothing to report. Another quiet day.”

“Except that they didn’t see me come in,” Rani said, meeting Rasd’s eyes. “Perhaps you are not as good a master of war as you claim to be.”

“Who said your return was worthy of reporting?”

“Ouch.” Rani put his hand on his heart. “This one stings, my friend.”

Rakamai clapped twice. “Can we please keep it professional for a minute?”

“Apologies, Master,” Rasd and Rani replied in unison as they bowed.

The two men laughed and apologized again, promising to stop their banter after claiming not seeing one another for several months to be their excuse. Rakamai didn’t believe it, knowing that this was how they always behaved with one another, but he chose not to comment lest he reignite their sallies.

“What news of the East?” Rakamai asked now that everyone looked serious again.

Rani inhaled deeply. “A couple of weeks ago, I received information about a group of scientists from the faction of Lunar heading north.”

“So what?” Rasd asked. “Lunar and Delphia are allies. It’s normal for their people to travel between the two factions.”

“Not really.” Rani shook his head. “It’s true they are allies, but it’s not like tourism is open between the two places. Plus, we are not talking about ordinary people. I had to know more.” Rani paused, and as every eye fell on him, he continued. “I followed the Lunardis until they met with a few Delphians in the small forest outside their capital, and I didn’t like what I saw there.”

“What?” Retan asked, her eyes wide.

“They were installing some sort of device in a small tunnel outside the city.” Rani lowered his head and lowered his voice. “It looked like Lunar’s laser cannons, and—”

“That doesn’t make sense,” Rakamai interrupted. “Lunar places their cannons on the top of their buildings or high pillars. Even if they gave their technology to Delphia, why would they put one in the ground?”

“My thoughts exactly, and therefore I thought I needed to report it. Lunar doesn’t give Delphia their technology. Instead, they build them machines that Delphian scientists design. This is the first time I’ve actually seen Lunardis technology inside Delphia.”

“This could be dangerous indeed,” Rasd said, scratching the back of his neck. “What you’re saying means that they are not just giving them daily life technology, but they are also arming them, and it looks like their cannons have even advanced beyond our knowledge.”

Retan crossed her arms over her chest. “Actually, that is the part that worries me. Lunar technology is advancing too fast. Soon, our magic won’t be enough to keep up with them.”

“Exactly,” Rani said. “This is why I keep telling you that we need a science division. We can’t continue to live in the dark ages while the world around us evolves at a rapid rate.”

“And how do you suggest we do that?” Rasd asked. “Would you like me to pull my soldiers from their gate training or border patrol to build a few luxurious tools?”

“Technology is not just about luxury. It can protect us. Plus, I didn’t say you need to pull all your soldiers, but a small group would do. We use our magic only to train or fight. If we divert the powers of five or six men, this village could become a heaven on its own.”

Rasd’s tone grew sharper. “All who live inside our walls have the power of gate magic, and even though their mastery differs, nearly everyone can transform their homes and entire lives into that so-called heaven. No one would stop them if they chose to open a gate and conjure an entire house with Lunar’s sleek designs and built-for-comfort machinery, but they don’t. Instead, they count on those cowards who abandoned our ways and the practice of magic to build them basic instruments. Why do you think that is?”

Rani muttered something under his breath.

“Because of the price we pay for our magic,” Rani shouted.

“Exactly. Every minute we spend using magic is a minute taken away from our lives, a hundred heartbeats vanishing into thin air.” He moved closer to Rani. “Our people use their magic only to get stronger or fight the enemy, nothing more. Don’t let your time undercover take away your identity.”

“Don’t talk to me like I don’t understand our way of life. I grew up here, and I prefer our style over theirs.” Rani paused, taking a deep breath before speaking in a calmer tone. “All I’m saying is that a few of our people use their magic to conjure weapons similar to theirs, and then we can all stop practicing—”

“That will only put us in defense mode,” Rasd argued with a shake of his head. “Then what will you do when they have better weapons? Lunardis have the power of their seeds. It makes them geniuses. This scientific and technological idiocy comes easy to them, and they will always be years ahead of everyone else.” Grunting, Rasd added, “I can’t believe I’m explaining this to our master spy.”

“Enough! Now is not the time to discuss our way of life,” Rakamai shouted. The two men lowered their heads and moved away from one another as their leader started to pace the room while holding his wrist behind his back. “If Lunar and Delphia are fortifying their factions, then we need to anticipate a potential attack.”

“But why would they strike?” Retan asked. “The war has been over for a decade, and we haven’t been interacting with any of the other factions since. We have no quarrel with either of them.”

“For now, but let’s be realistic. They will never stop trying to go after our magic.”

“I don’t think anybody cares anymore,” Rani threw in.

Rasd walked to Rani and put his fist on the latter’s chest. “You need to be more careful with your words, my friend. Your belittling of our home is going to make me like you less.”

“I live around those people. It’s my job to know how they think, and I’m only stating what I see, friend.” Rani sighed. “The world is evolving, Rasd. Sooner or later, we will have to do the same.”

“Your absence from the faction is making you weaker,” Rasd said, shaking his head and turning to Rakamai. “I will get my men to do more shifts and double the border patrols.”

Rakamai nodded. “It’s a good strategy to keep in mind, but let’s not jump to conclusions. We will sleep on it and decide on a plan the next time we meet.” He shifted his gaze between all three before focusing on Retan. “Follow me,” he said to her and started toward the exit of the temple.