Glass Memory Is Finally Out

Glass Memory is Book 2 of the Illicitum series is the story of Orantine and her quest to infiltrate the faction of Delphia where everyone can see the future.

Like Book one this story is a standalone. This means it can be read on its own, as a prequel or within its series order.

However, the events of this book, like Twelve Jackals sets up the main story for the entire series which really begins with Book three, Ascension Trials.

Can one spy infiltrate a faction where everyone sees the future?

Orantine has everything, a happy family, a genetically enhanced body, and a dream job that labels her as the faction’s greatest spy. When she receives a mission to investigate a faction where everyone sees the future—a job no one has succeeded in finishing before—she must lose everything.

Orantine and her scientist husband formulate a plan that will allow her to manipulate the enemy. Its first step is for Orantine to lose all memory of her last five years. To succeed, she must complete her mission and find the way back to her real life.

Can Orantine do what no spy has ever done? Or will her choices doom the rest of her life?

In her early twenties, Orantine bellieves herself to be the greatest spy of her faction. She is happy with a husband that loves her and daugher that fulfills her life. Yet, Orantine finds it hard to pass on a challenge that puts her own abilities to the test.

She is a master at using the six seeds on her body which allows her to manipulate her own organs at will.

She loves chicken, especially when its grilled and with a pinch of lemon on top.

She prefers to be called Oran, but only those she loves can use the name.

Orantine is a dreamer, but that can be her worst quality sometimes.

Orantine’s husband is a leading scientist in the government’s main invention facilities. His favorite part of his job is taking old inventions and building them a new with a design that fit the time and blends with the Lunardis seeds.

He loves Oran more than he loves his job, but is afraid of her spy work, though he would never admit that to her. Still, he trusts that his own wife is capable of the impossible.

Boday is calm, quiet, and a fan of simplicity. He is a little maniac when it comes to being clean and having everything organized but not to an unsufferable level.

Matso is Orantine’s target, but his ability to see the future makes him the most dangerous opoonent Orantine ever faced.

He is an enigma that Oran needs to discover.

Thanks to Christina P. Myrvold, the cover of Glass Memory displays Orantine on the roof top of a Delphian building.

Delphia is a faction with skyscrappers that pierce the clouds. People there live only on the rooftops and are banned from going to the ground. 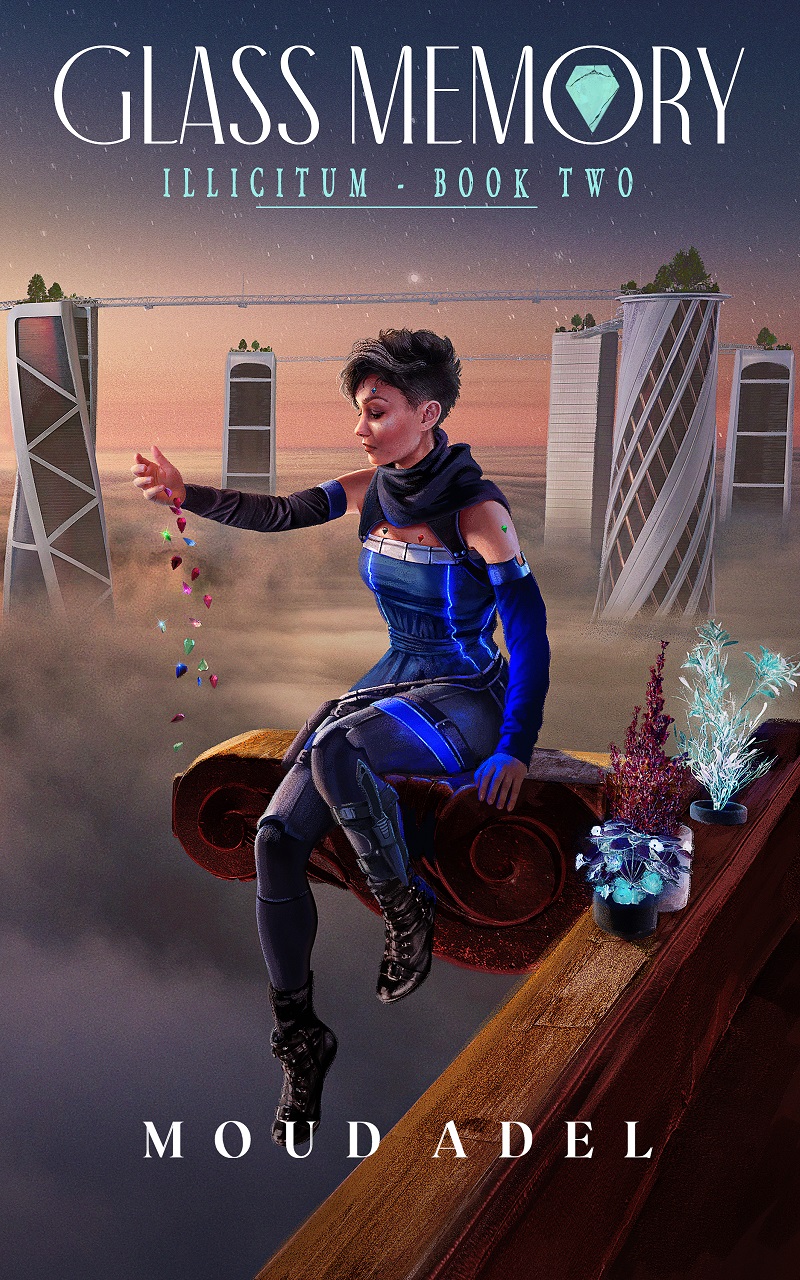